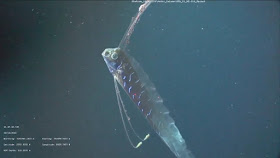 The Giant Oarfish is the longest bony fish in the world and with reported lengths of up to 17 metres (56 feet), it even competes with the Whale Shark for the title of longest fish in general!

"Longest fish in general" means bony fish and cartilaginous fish, not fish in the world and fish from places other than the world. Just to be clear.

The Whale Shark would definitely win in a fight, though. Despite being unbelievably long, the Giant Oarfish still manages to find a way to be barely there at all!

They are ridiculously slim... absurdly so. I'm sure they're completely irresponsible in some way, but I'm not quite sure how. 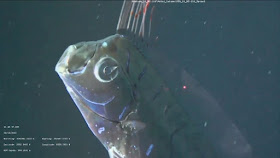 They spend their time in the ocean's twilight zone, where their massive eyes can catch enough of the dim light to be useful. With hypnotic undulations of what must be the world's longest dorsal fin, they swim vertically through the sea. VERY SLOWLY.

They also seem to sparkle in the light, which looks particularly fetching on their crazy, stick-out hairdo.

More about the video at Deep Sea News!
Unknown at 12:00